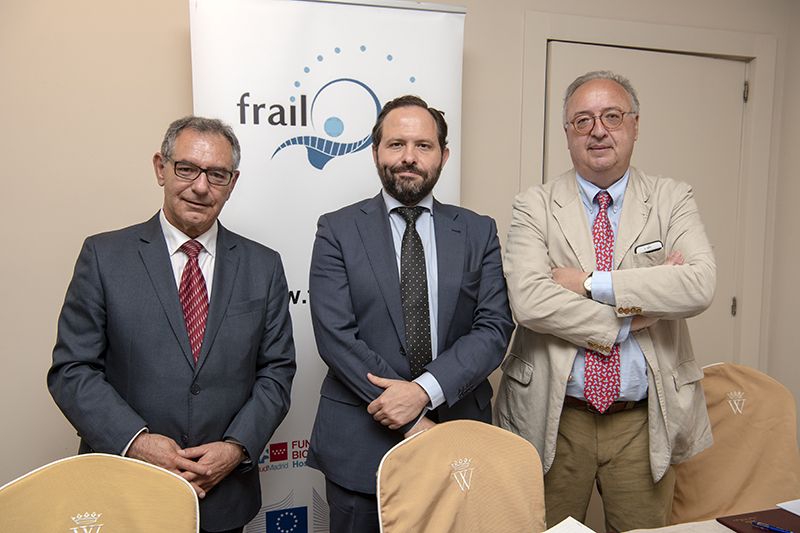 Laste 18, the Deputy Minister of Humanization of the Sanitary Assistance of the Community of Madrid, Diego Sanjuanbenito, has closed the Closing Meeting of the FRAILOMIC Project, coordinated by the Geriatrics team of the Universitary Hospital of Getafe, which has involved 27 institutions from 7 countries of the European Union (EU) and WHO with the aim of improving the ability to detect and predict frailty, which is the main risk factor for the development of disability in the elderly.  Currently, it is considered that frailty is the main element on which health authorities can act to promote a healthy aging of the population.

The FRAILOMIC initiative is a large scale research project aiming to identify the factors that turn frailty into disability.

The anticipated rise in the number of older people this century will inevitably be accompanied by an increase in the number of people with disabilities. Frailty, which comprises changes associated with ageing and chronic disease, usually precedes disability. Detecting frailty and intervening before it becomes disabling is more and more necessary as the population ages. Testing the clinical utility of the existing definition of frailty using a combination of clinical and laboratory biomarkers is pivotal.

The FRAILOMIC initiative is designed to use biomarkers to determine the factors that turn frailty into disability. The main objective is to develop clinical instruments to predict the risk of frailty, improve the diagnostic accuracy of frailty in day-to-day practice, and to assess the prognosis of frailty in terms of disability and other adverse outcomes.

The preliminary findings of the FRAILOMIC study indicate that health professionals and researchers will be able to have a “set” of indicators (data on the state of health) in the near future that will allow them to identify the elderly at risk of suffering disability. From here, treatments and preventive measures can be implemented to avoid, delay or limit the loss of functionality (ability to perform daily tasks such as walking, cooking, going out to buy, etc.).
According to the study, a series of indicators or health data related to inflammation,  genetics and metabolism that are associated with frailty have been identified. This will allow the development and implementation of tools (analysis, scales, etc.) to measure this risk in the medical consultation.

LEADER IN EUROPEAN FRAILTY PROJECTS
Dr. Rodríguez Mañas, through the Geriatrics Service and the Biomedical Research Foundation of the University Hospital of Getafe, currently leads 3 important European research projects on frailty and the prevention of dependence in elderly patients (Frailclinic, Frailomic and Frailtools), financed by the EU with more than 19 million euros and involving 25 groups from 9 European countries and the WHO, having as main objectives the knowledge of the mechanisms of frailty in the elderly and the discovery of treatments that allow to reverse the state of fragility, avoiding or reducing disability. Also within the Area of ​​Aging, the University Hospital of Getafe participates as a partner in four other research projects (Sprintt, Acanto, Deci and Facet) that have 2.1 million euros of EU funding. It also coordinates the Center for Biomedical Research in Network on Healthy Fragility and Aging (CIBERfes), within the CIBER consortium of the Carlos III Health Institute. The Community of Madrid (Ministry of Health-Getafe Hospital) currently coordinates, by delegation of the Ministry of Health, and through the group of Dr. Rodríguez Mañas, the European Joint Action on Frailty Prevention in the Elderly, which aims to build a strategic framework for the preventive approach of this issue at a European level and favor collaboration between the States to help solve public health problems.