Through its Foundation, Hospital Universitario de Getafe manages different projects on a competitive basis or through agreements, donations and clinical trials. The projects carried out in the Hospital are mainly funded by public and private grants. In the public sector, the Biomedical Research Foundation has managed a number of Healthcare Research Projects within the area of Strategic Action in Healthcare at the Instituto de Salud Carlos III [Carlos III Healthcare Institute] (ISCIII). This initiative is part of the State Plan for Scientific and Technical Research and Innovation 2013-2016, and its main objectives are to carry out, promote and strengthen research in the Spanish National Health System.

European Projects The Institute began coordinating European research projects on frailty in 2010 and has now led and coordinated 5 of them (MIDFRAIL, FRAILOMIC, FRAILCLINIC and FRAILTOOLS, funded by the European Commission’s 7th Framework Programme for Research and the Horizon 2020 Programme), in addition to the European Joint Action on the Prevention of Frailty (ADVANTAGE JA), the coordination of which was entrusted to the Madrid Health ServiceHospital Universitario de Getafe by the European Commission.

Within the area of ageing, Hospital Universitario de Getafe has been a partner in another 5 projects since 2014: SPRINTT within the IMI (Innovative Medicines Initiative) programme and since 2015 in the ACANTO and DECI projects, which were funded by the Horizon 2020 programme, and VIVIFRAIL, under the European Erasmus+ programme. Since 2015, this Hospital has also been involved in the FACET project, within the framework of EIT Health, one of the Knowledge and Innovation Communities (KICs) promoted by the European Institute of Innovation and Technology (EIT).

The following graph shows the development of the research projects active at the end of each period.

The following image shows the development of clinical trials and observational studies active in 2017. 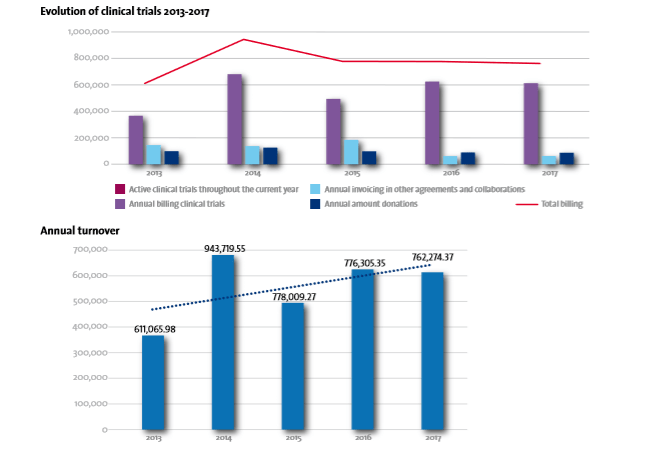